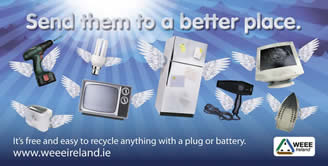 Published on 9th December 2009
in News

The Green Committee continue to try to raise our awareness of our role in protecting the environment. The recycling initiative continues and we have greatly reduced the amount of waste we send to landfill. It is an area that needs constant effort however as complacency is our greatest enemy. We have also started a Battery Awareness Campaign. Battery recycling aims to reduce the number of batteries being disposed of in landfill. It is a big concern because of contamination, of soil and water pollution, by the

addition of heavy metals and other toxic chemicals from batteries. There is a battery recycling box in reception for anyone who wants to dispose of old batteries safely.

Christmas time is the worst time of the year for the creation of waste This Green Christmas Repak is calling on all households to recycle rather than burn any used packaging they generate. While throwing items into the fire prevents them from being land filled, this still has a detrimental impact on the environment, sending carbon emissions soaring. This Christmas each household in Ireland will generate circa 60 kilos of used packaging in total. This will create a used packaging mountain in the New Year weighing up to 80,000 tonnes and if we recycle 45% of this used packaging then it can result in the saving of 43,000 tonnes of carbon.

As households get into the festive spirit it is estimated we will munch our way through 8.5 million mince pies, 1.4 million tins of biscuits and nearly 1 million selections boxes and will pull over 16 million Christmas crackers celebrating the festivities.

If everyone was to cut back by just 5% it would reduce our carbon waste by 5.000 tonnes.

The Green Committee are keen to encourage this in Beaufort. To help raise awareness they organised to have two blue electrical waste bins on campus for the collection of electrical waste.

Thank you to all who have helped organise these events and we look forward to your continued support in the New Year.